SCIENCE AND ART FESTIVAL
Fans from around the globe will celebrate STARMUS V – the world’s most notable science and art festival. This year promises to be the most important program to date, coinciding with the 50th anniversary of the moon landings, one of science’s most important milestones. Hans Zimmer will be performing on the opening event of STARMUS V. This special evening will conclude with the announcement of the winners of the Stephen Hawking Medal, which was personally inaugurated by Hawking in 2016 to honour those who are particularly committed to promoting public awareness of science.

Jean-Michel Jarre will headline a concert with “star sounds” never before heard here on earth. In addition to astronaut Michael Collins joining as the keynote, STARMUS V will host a remarkable line-up of presenters hand-selected by the STARMUS board (Stephen Hawking posthumous, May-Brit Moser, Elizabeth Blackburn, Linda Buck, Brian May, Peter Gabriel, Richard Dawkins, Alexei Leonov, Jill Tarter, Robert Williams, David Eicher, Emmanuelle Charpentier and founder, Garik Israelian). The 2019 festival STARMUS V will also feature seven of the original Apollo Mission crew, science legend and champion Bill Nye along with rock stars Brian May, Brian Eno, Steve Vai, and Rick Wakeman. And as a special homage to the Apollo Missions and those who made them possible.

The event kicks off with a spectacular opening concert entitled “Once upon a time on the Moon”. Here, artists including Oscar winner Hans Zimmer, Queen cult guitarist & composer Brian May and Yes star Rick Wakeman, together with the 21st Century Orchestra & Choir, will pay tribute to the unique connection between space, science and music, in the presence of several Apollo astronauts. Zimmer’s film scores for “Inception” and “Interstellar” offer the perfect sound for this – combined with unique visuals from “Interstellar” visual effects creator Paul Franklin and Nobel laureate physicist Kip Thorne, they will ensure a Galactic experience. David Bowie’s “Space Oddity”, as interpreted by Rick Wakeman and astronaut Chris Hadfield, and a fantastic all-star finale with Queen hits, are also on the programme. This special evening will conclude with the announcement of the winners of the Stephen Hawking Medal, which was personally inaugurated by Hawking in 2016 to honour those who are particularly committed to promoting public awareness of science. The hosts for the evening will be “Science Guy” Bill Nye and TV presenter Charlotte Maihoff.

According to Garik Israelian, STARMUS founder, the 2019 festival has been designed to ask tough questions about our place in the universe at a pivotal point in human history: “The importance of STARMUS V cannot be understated. At a time when the world retreats to isolationism, collaboration is needed to strategically present the ideas, evidence, and challenges we collectively face – and uniquely confront. We believe the biggest and best achievements of the human race are a result of that scientific collaboration.”

STARMUS V will welcome 12 Nobel laureates to the stage, as well as luminaries from the worlds of art and music, for six days of discussion, debate, and engagement across the sciences, from microbiology and biochemistry to astrophysics and neuroscience. The 2019 programme will bring together some of the most intelligent, creative, and artistic people on the planet.

Have a look at the programme: STARMUS.COM 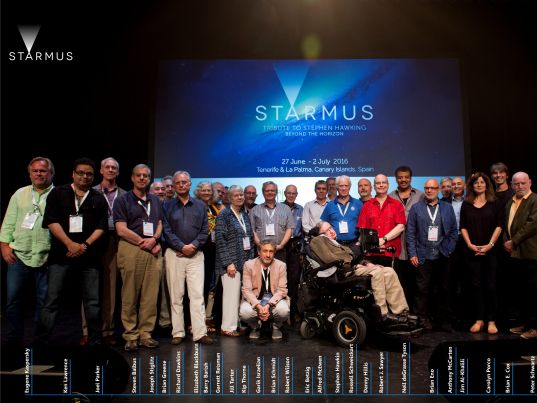